Cipollini is located as part of the luxurious Americana Manhasset shopping plaza, that has every store from Gucci to Tory Burch to Brooks Brothers. Cipollini has nice outdoor seating that is perfect on a summer’s day, and they tended to be very crowded on Father’s Day. The interior seating is also nice, and the whole restaurant appears to be quite a “scene.” People are flashy and notably wealthy, and it makes for quite an experience.

We came on Father’s Day and the restaurant was packed, but we had a reservation and got a very nice table outside. The restaurant is sandwiched right between Coach and Hugo Boss. People are passing by constantly, and it gives a very NY Italian restaurant feel.

The service was notably awful, and it may have been because of how busy their lunch service was that day. The waiters didn’t care to tend tables, and it was like they were doing you a favor if they did. A very fair chunk of time passed before we ordered our dishes.

However, the food was of a pleasant NY-style quality. The clams oregano and calamari were nice — they weren’t exceptional or original dishes, but they were still pleasing.

The main entrees also looked very visually appealing, and I was a big fan of my “penne al la Cipollini,” which is basically penne alla vodka. At our table was also veal Milanese, which looked more like a salad at first glance, and a funghi mushroom pizza.

I enjoyed the simple presentation of my pasta. I’m always a sucker for creamy pastas in a simplistic white dish. The waiter grated cheese right on top, and I asked for a side of prosciutto. It took the service a while to bring my prosciutto, but I survived nonetheless. I think the prosciutto was one of my favorite parts of the meal. The pizza was also very tasty, and had a thin crust. The pie is served as a personal pie, but can probably be shared between two people. 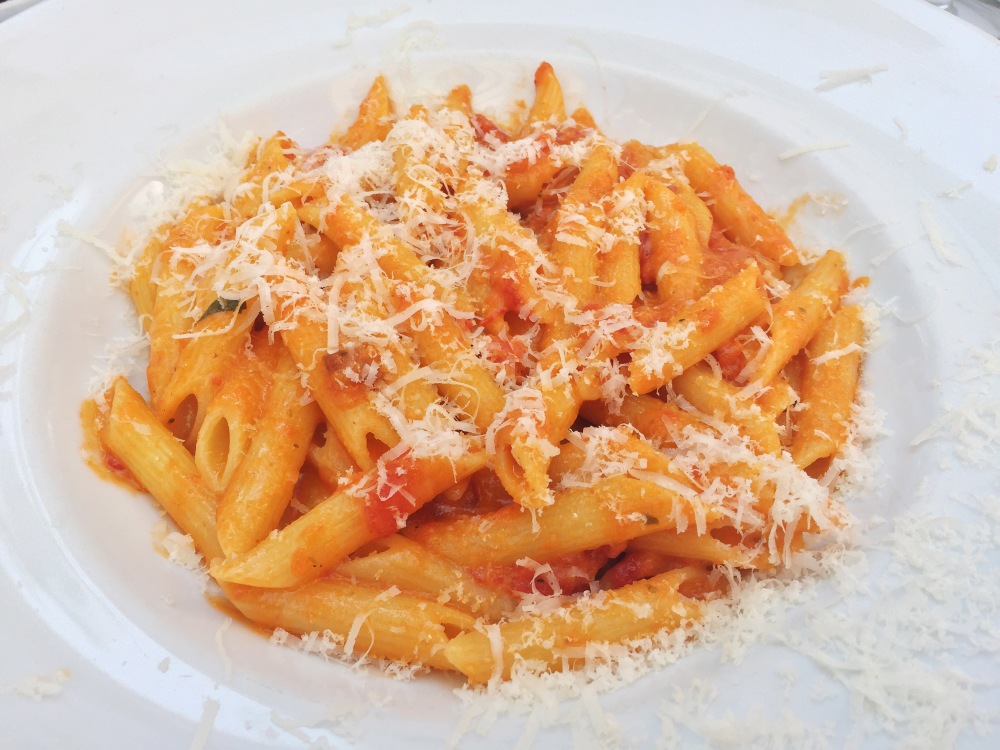 For dessert, I heard a lot about ordering the “affogato.” I had no clue what an affogato was, but I discovered that it’s essentially vanilla ice cream with an espresso shot over it. The dessert is very classy and visually appealing. I took a few bites of the ice cream, but I largely avoided the dessert since I’m not the world’s biggest fan of caffeine. We also had a Napoleon, which looked very fresh and flaky. I’m not a big Napoleon fan either, but it tasted decent enough.

All in all, I had a generally positive review of Cipollini because of the atmosphere. The food is good, but nothing exceptional or noteworthy. The service was decently awful when we went, but improved by the end of the meal. I think the atmosphere is an experience in itself — the volume of people, the air of wealth, and the great outdoor seating. I definitely intend to come back.