Go make a reservation! You can’t… This restaurant actually isn’t even open yet. You can’t go even if you wanted to, unless you wait until their official opening in the Fall. Sen Sakana is a new fashion restaurant that is opening in Midtown, and it interestingly fuses both Japanese and Peruvian cuisine. There is no website or menu available (yet), but there is a NY Times Article, and well — this post.

I was deeply confused by the combination of Japanese and Peruvian cuisine, since I have never heard of it before. However, it exists — and it’s apparently called “Nikkei cuisine.” I was able to get a nice seat at this restaurant with a dear friend of mine who happened to be family friends with the Chef. The restaurant owners were allowing dear friends and family to come and taste their wonderful new menu… for free. 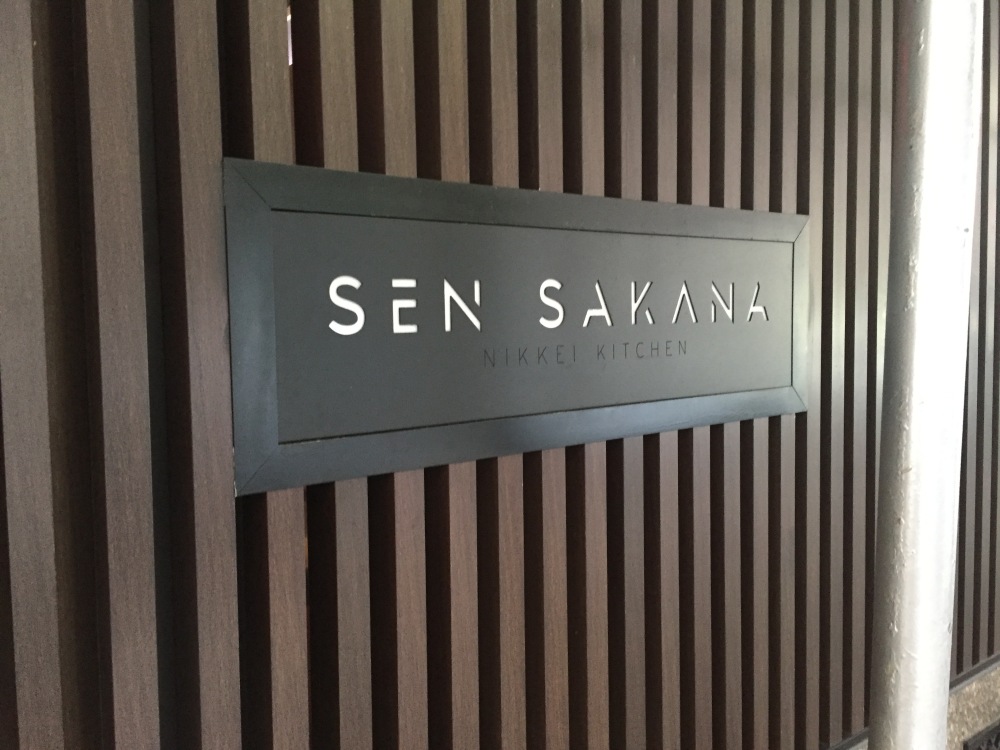 Yes, for free. We sat down at this contemporary, yet comfy restaurant tucked in Midtown.   The atmosphere is clean and minimalistic, but has a darker, more robust feel. The restaurant is fairly large, and has an attractive sushi bar towards the back. The entryway  makes you feel like you are entering an exclusive club. For all intents and purposes, I definitely felt like that was what I was entering.

Well, long story short — my friend and I had about $500 of food for free. We taste-tested the menu for approximately three hours, and it was shameless. However, I will say that this restaurant had the absolute best sushi I have ever had. The sheer passion, freshness, and meticulous care in each piece of sushi was noticeable in both taste and presentation. It was truly an experience, rather than a simple meal. 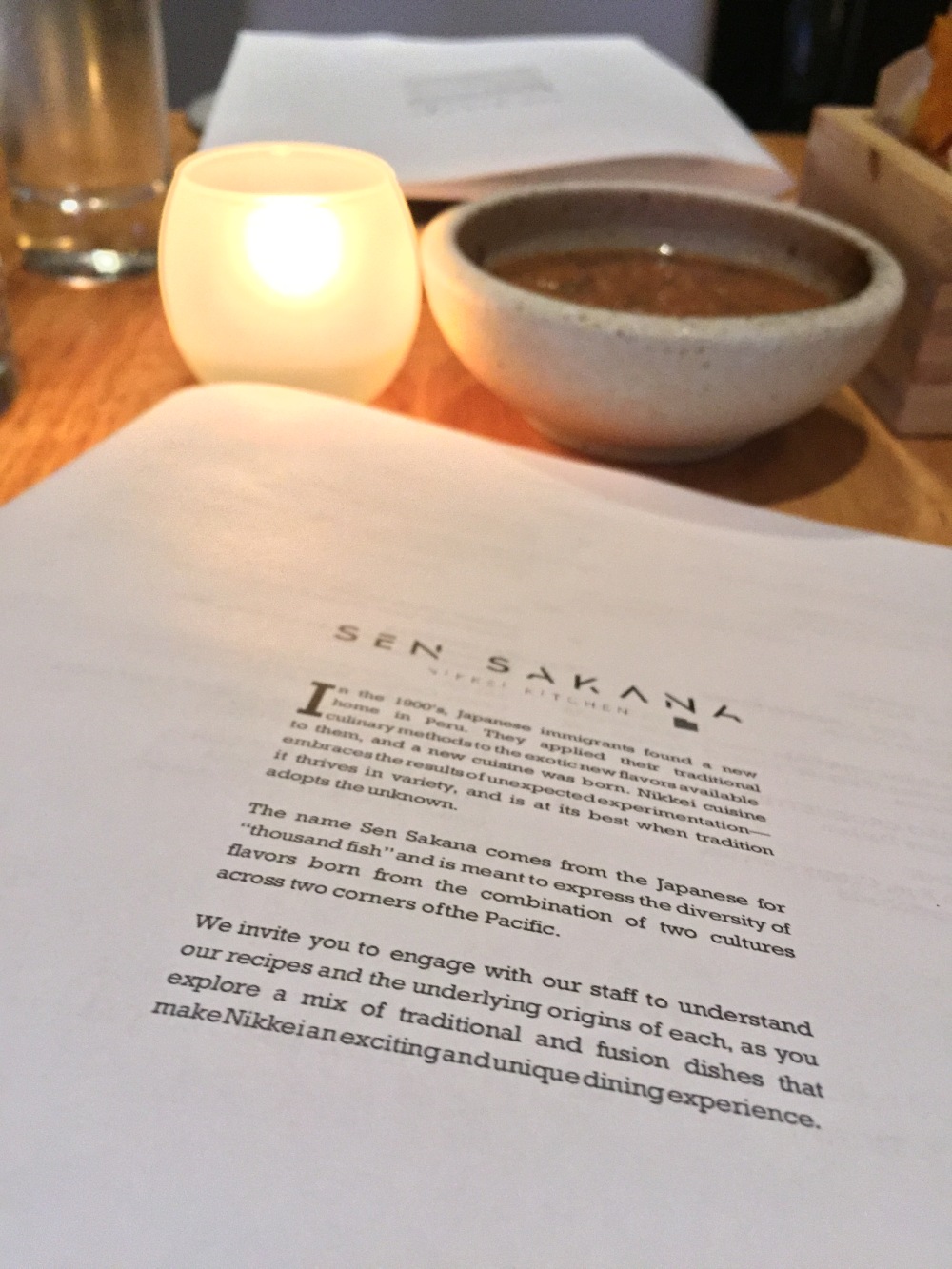 As a starter, we had “root chips,” which were tasty and thinly sliced and served with a mild form of some Peruvian salsa. They were rather addicting, but guilt-free.

The restaurant has a large assortment of drinks, but they do have three very well-crafted non-alcoholic drinks. I usually never order virgin drinks at a restaurant, since they’re usually nothing but soda and sugar. However, these drinks were refined and crafted very well. Although you will have to excuse the fact that I don’t remember the names of these drinks, the one with vinegar was by far my favorite out of the three. It had a small bitter kick that was pleasantly powerful. I also ordered a regular glass of sparkling water, and the brand of their sparkling water — whatever it may be — was noteworthy. The sparkling water was the real deal — strong, crisp taste that was definitely not the average Pellegrino or Perrier.

We ordered a couple of appetizers — the gyoza and a skewer of pork belly wrapped in bacon. (There are more technical names — of course — for these items, but I unfortunately have no way of collecting those names, for now). The gyoza was presented in a form that I had never seen before. It was necessary to flip the gyoza upside down, as all the potstickers were stuck together, and then separate them into individual pieces with chopsticks. All side sauces and spices provided with these appetizers were wonderful. The skewer was delicate, tender, and fulfilling.

I have always wanted to try Omakase, which is essentially Chef’s choice sushi. Some restaurants Americanize the phrase to “Surprise Me Sushi.” The Chef will pick whatever sushi he would like to showcase to you. I would typically not order Omakase on my own, given that the dish was a solid $80, but here was my chance. We ordered some Omakase sushi platters, including one called “Nikkei Omakase,” which was this restaurant’s very own Peruvian twist on a Japanese classic.

The sushi and sashimi was brilliant. It was a dream. Each piece was delicate, fresh, and inviting. I am usually skeptical about trying certain white fish and other fishes, since I generally prefer not to eat them at most restaurants. But at this restaurant, there was no refusal. I tried everything, regardless of what it was. (I even ate sea urchin gonads — AKA Uni — which I didn’t know were consumable.) It was by far, the best sushi and sashimi I have ever had. I fully entrusted the sushi chefs with their choice of fish, their presentation, and freshness — which is a rarity for me, since I usually don’t trust sushi chefs that much. We also ordered a typical salmon avocado roll (sure, why not?), but it was definitely overshadowed by the brilliant pieces of sushi all around it. 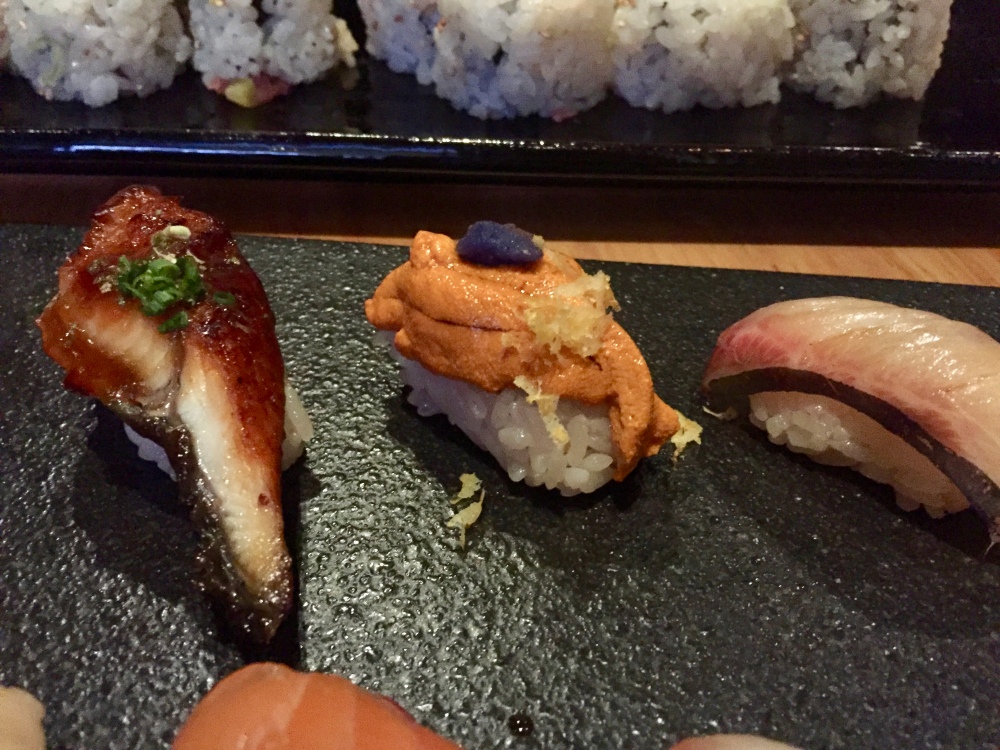 Then, we went on to order main dishes (as if I wasn’t already full beyond reasonable measure). We also ordered a couple more appetizers… heh. For the main dish, I simply asked for a recommendation, and they recommended the “chaufa,” which consisted of pork belly and quinoa rice. Even though I had absolutely no reason to be skeptical, I was skeptical. How good can “quinoa rice” really be? Well, lo and behold, this dish was amazing. It reminded me of Korean bibimbap. I also love eggs, so the egg on top was a huge win. The pork belly, although I was way too full to finish it, was crisp. The seasoning and sheer flavor of the quinoa rice alone was impressive, and I would absolutely love to have this dish again.

My friend also ordered a steak entree, which was beautifully prepared. I also ordered their famous “Causa” appetizer, which is a Peruvian potato dish. The Causa was like a cold, well-seasoned crab cake with potato. It is unlike any appetizer I have had before. They also had purple potato in it — yes, purple potato that is the color purple. Finally, we had another small steak dish which was cold and served with jam. (I realize that was a rather poor description, but please bare with me — I have yet to become fluent in my Nikkei cuisine). 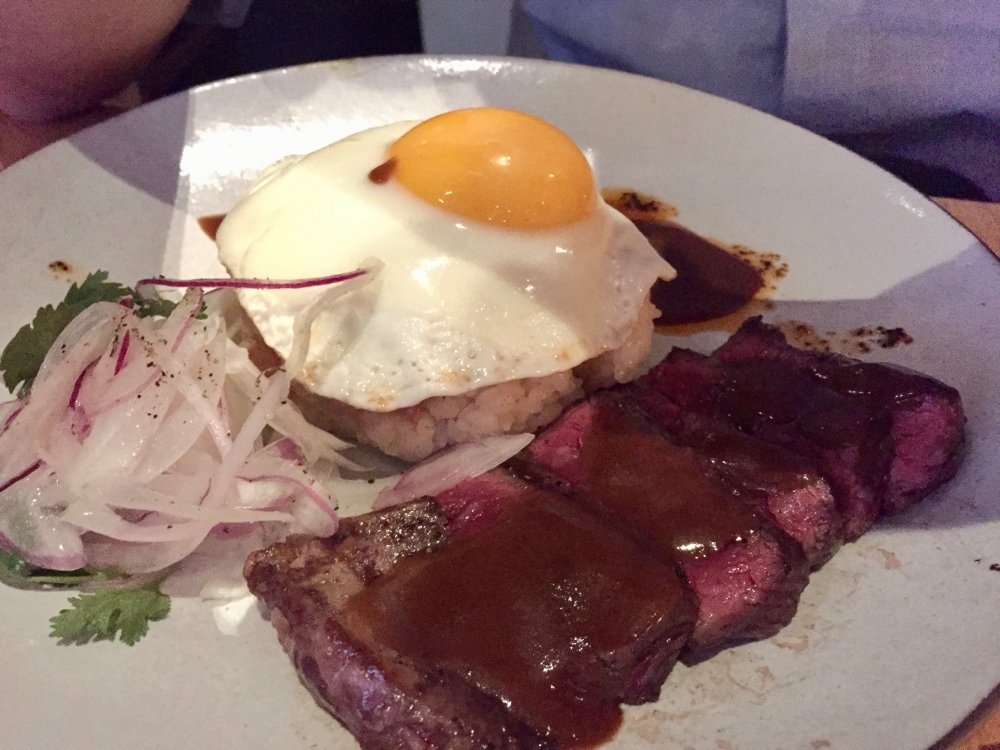 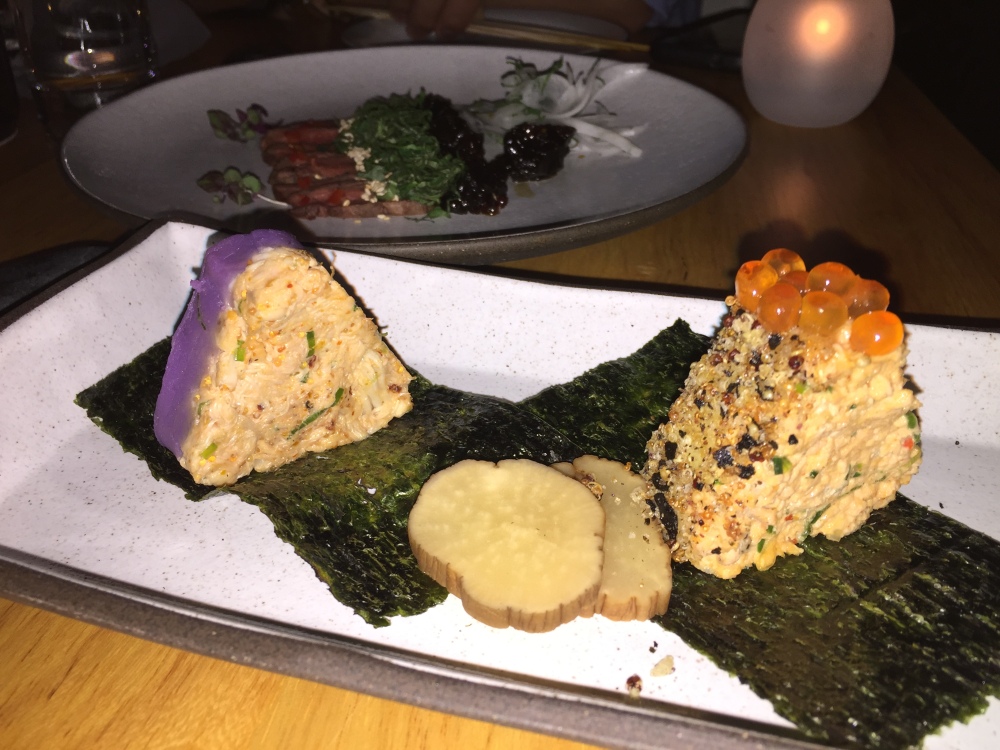 At this point, I had likely eaten more than I have ever eaten before. But, every single bite I had at this dinner was wonderful. We had to make room for dessert though, of course. We ordered a dulce de leche cake with green tea ice cream, and we ordered a Belgian waffle dessert with banana ice cream.  I was very surprised by the presence of a Belgian waffle on the menu, for I didn’t really see the connection between Peruvian or Japanese cuisine with this waffle.

Although both desserts were fairly good, they were by no means impressive or show-stopping. The presentation was underwhelming, and although the dessert was somewhat unique, it also was truly not. Dessert can definitely be eaten elsewhere, if preferred. However, I will admit that I was filled to a brim when I had this dessert, so perhaps I was just overly saturated with food such that I couldn’t fully enjoy the sweetness.

Overall, nonetheless, this was one of the biggest and most wonderful meals I have had in a very long time (or perhaps ever). The sushi was — by far — the most remarkable and unique experience. The overall freshness and presentation was noteworthy and impressive. I enjoyed experiencing a new cuisine that I had never heard of, which mixed some foods that were both new and old to me. As a sushi lover, I am grateful for such an experience.

I would also like to add that the service was wonderful. I met the sushi chef who was family friend’s with my friend. Our waitstaff was attentive and very patient with my lack of knowledge about the menu. In fact, they were extremely informative. Our waitress was able to explain any dish or food in tremendous detail, as if she was reading a Wikipedia page about the dish itself. It was comforting and brilliant.

Perhaps, I would come back to Sen Sakana again (but perhaps, I wouldn’t order an $80 sushi dish again, unless I truly go swimming with the riches). If you ever have some money and don’t know what to do with it, but you do know that you would love some really great sushi, go ahead to Sen Sakana. Of course, I will give acknowledgements to my friend for taking me on such a culinary experience.